On the very first day of Aadi that is usually called as aadi pirappu or aadi pandigai is celebrated with a feast that is offered to god. This Aadi paal is made on this day and offered to god.

Pudhu mappilai/son in law is invited to the girl’s house and gifted with new clothes. Aadi month is majorly dedicated in prayers to Goddess Amman.

Few of the other payasam offered to the god, 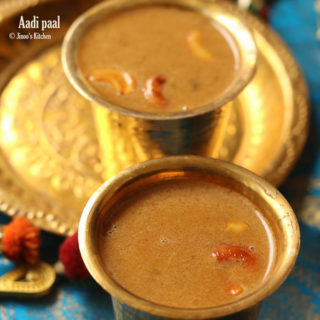 step by step instructions with pics

To make this aadi paal, lets first prepare the jaggery. In a saucepan, add jaggery with little water.

To the clean jaggery water, add thin coconut milk or the second extract. Stir continuously and let the mixture come to a boil.

Lastly, add cardamom powder and thick coconut milk. Put off the flame. Since we are making in an earthen pot, the heat in itself is sufficient for the first coconut milk to get heated up.

Melt ghee and fry the cashews until slightly roasted.

Add the roasted cashews to the payasam and mix once.