Koova payasam |Thiruvathira recipes| arrow root payasam with step by step photos and video recipe. This kuva/ koova payasam is one of the simplest and important dessert that is made on the day of thiruvathira/thiruvathirai.

Made with arrow root powder and very minimal ingredients, this is served to god and had as a fasting/”orikkil” prasadam. it is almost like a jam consistency unlike the normal payasam.

thiruvathira/thiruvathirai/arudraa dharisanam is a Hindu festival. We take up this fast and prayers to Lord Shiva for the well being of the husband, Brother or Son.

I had posted this recipe in 2015 and updating it with recent photos and video. Also Thiruvathira puzhukku is made on this day. worshipping Lord shiva and having wheat(non – rice) and one time meal is often followed in the vratam. 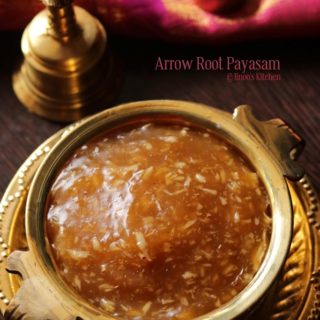 some even add chopped bananas finally for an added flavour.
Keyword kerala recipes, thiruvathira recipes
Tried this recipe?Let us know how it was!

1.very first step in making the koova payasam is to mix the arrow root in water and making it lumps free. for this take the pan in which your cooking to cook and add arrow root powder and water in equal measure.

4. meanwhile, in another pan. Melt the jaggery with 1 cup water.

5. Mix and melt until lumps free

6. let it cool a bit and while it is warm, add it to the arrow root along with coconut grated.

9. keep stirring until it thickens. takes 2-3 minutes. but thickens quickly. so keep an eye and stir quickly.

10. while it thickens, put off the stove and stir well to make it smooth and without lumps. remove from stove once you reach the consistency desired.

traditionally, this payasam is like kool/jam like consistency. but in case you like it runny, then have hot water besides and add it little at a time and mix well to make it thin.